Partners of the Americas is hiring part-time consultants in Haiti and the Dominican Republic, Minnesota native and Partners senior staffer in Washington Theresa McMenomy tells us.

The birthday of Artigas

Today, June 19, is a national holiday in Uruguay celebrating the birthday of José Gervasio Artigas, the country's greatest hero.

The holiday follows by less than a week this year the annual "fiesta days" in Montevideo, Minnesota (pop. 5,331) marking that city's century-long relationship with Uruguay.

Members and friends of Minnesota-Uruguay Partners (a selection of whom are pictured below) gathered last weekend for the festivities, which included good food and drink, fine company and not least song (flags were raised and both national anthems were sung to mark the special day).

On behalf of the many, many Minnesotans who have been so thoughtfully hosted in Uruguay over the nearly half century since the founding of Minnesota-Uruguay Partners, we want to extend our warm wishes for a wonderful "Natalicio de Artigas" holiday to our friends in Uruguay today. 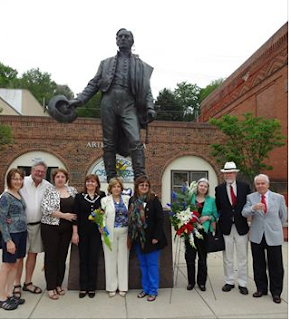 Dr. Nury Bauzán, Uruguay's Consul General in Chicago,
and Montevideo Mayor Debra Lee (fifth and sixth from left, respectively)
at the June 15 "Fiesta Days" celebration in Montevideo, MN.
Posted by Minnesota-Uruguay Partners of the Americas at 3:51 PM No comments:

Minnesota-Uruguay Partners of the Americas is delighted to acknowledge a generous donation from IBM in support of our mission for 2013. The company has been a steadfast supporter of our work across the state and abroad for years. Its financial contributions have helped expand our capacity to ensure high-quality programs can continue well into the future. Thank you Big Blue for your significant and continued support!

Posted by Minnesota-Uruguay Partners of the Americas at 2:14 PM No comments:

Last month marked the arrival in Uruguay of the University of Minnesota's annual "May Term" Art Department trip. Emerging artists from Minnesota spent the month meeting with renowned Uruguayan artists across a range of disciplines and media.

It also marked the first visit of Minnesota-Uruguay Partners member Tara Gupta to Montevideo, who was invited by the United States embassy to speak at an event on youth leadership. Tara was Minnesota's delegate to the annual Partners convention in Colombia in 2011, where she was invited to speak on her nonprofit work as an Edina High School student with Seva Football, a group she founded to engage and advance young girls through sports.

The Minnesotans were welcomed warmly and with much generosity by the Uruguay-Minnesota chapter of Partners throughout their stay. The chapter's regular meeting, which included the art students and Tara, is pictured below.

Posted by Minnesota-Uruguay Partners of the Americas at 9:20 AM No comments: