Thank you for attending the annual member meeting!

Members and friends of Minnesota-Uruguay Partners came from far and wide December 10 (despite the second big snowstorm in the last three years of annual meetings) to celebrate a highly productive year for our group.

Many thanks to our gracious hosts, Diane Katsiaficas of the University of Minnesota art department, along with board directors Sarah Trembley, Kati Mae Duesler and Mark Knierim, for arranging the beautiful venue, delicious food, and so many other event details.

Gerard Lagos shared the good news that Minnesota-Uruguay Partners has been presented with a $3,000 grant from IBM, funding that will help us carry out important work next year.


Posted by Minnesota-Uruguay Partners of the Americas at 12:02 PM No comments:

On December 10, 2012, the mayor of the capital city of the Oriental Republic of Uruguay, Ana Olivera, declared Debra Lee Fader, the mayor of Montevideo, Minnesota (pop. 5,331), a distinguished visitor.

The historic meeting, sparked by Uruguay's outstanding consul general in Chicago, Dr. Nury Bauzan, who has made numerous visits to Minnesota, marks the first time in nearly 40 years that the mayors of the sister cities have met in person.

Minnesota-Uruguay Partners helped underwrite Mayor Fader's visit to Uruguay, through a travel grant awarded by Partners of the Americas' culture and education program in Washington.

Nahir Lois, a board director of Partners of the Americas, was quoted in this piece by the EFE news agency, which was reprinted widely in the Spanish-speaking press beyond Uruguay (Mexico, Chile, Spain etc). The widest-circulation newspaper in Uruguay, El Pais, also ran a lengthy piece about the visit, featuring an interview with the mayor. And El Observador also ran a nice article about the visit. 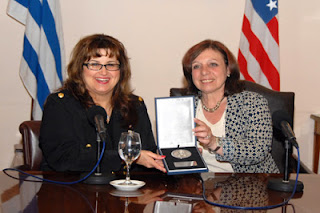 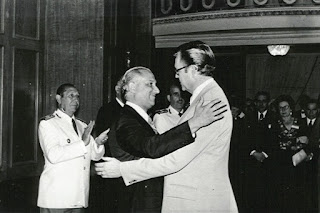 A world-class horse trainer and equine therapy specialist found himself more than 6,000 miles from home this month, standing alongside Susie Bjorklund, the founder of Freedom Farm in Waverly, Minnesota, as two clients mounted up for a riding session.

News of Freedom Farm's innovative approaches to equine therapy brought Gustavo Dos Santos, a captain in Uruguay's army, to Waverly and other horse facilities throughout Minnesota during the first two weeks of November.

Dos Santos was a trainer of Uruguay's paralympic team in China in 2008, and is currently a leader in his country's military-run horse therapy programs that treat more than 1,000 people across the progressive South American nation with physical disabilities, drug addictions, mental illness and other challenges. 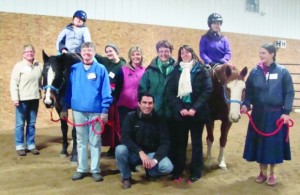 Dos Santos was invited to Minnesota under a nearly 50-year partnership between the state and the nation of Uruguay. An outgrowth of the Kennedy Administration's Alliance for Progress, Minnesota-Uruguay Partners of the Americas uses State Department funding and donations from members to bring professionals like Dos Santos across borders to share expertise and offer insights in a range of disciplines. Veterinary medicine, criminal justice reform, art and architecture and student exchanges are just a few of the group's activities in recent years.

Near Waverly, Dos Santos had training sessions with Janet Weisberg of Hold Your Horses in Independence, Minn., another highly regarded practitioner in the field. 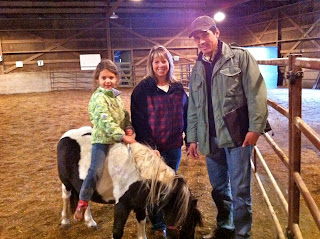 Elsewhere in the state, Dos Santos visited horse facilities in Granite Falls, Stillwater, Minnetonka, and not least the University of Minnesota's prestigious Equine Center, where staffer Sergio Gonzalez took him on tours at the Center as well as neighboring facilities. He also met with specialists working with Hazelden and Park Avenue Center to learn about their approaches to equine therapy for drug addiction.

Lynn Baskfield, the founder of Wisdom Horse Coaching in Minneapolis and the host for Dos Santos during the visit, said she'd like to see Minnesotans going to Uruguay to learn more about the equine therapy programs there. Stay tuned for news of more travels in equine therapy between Minnesota and Uruguay! 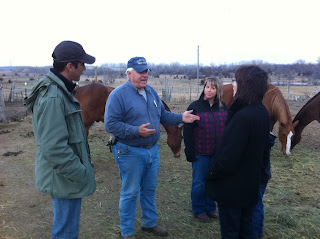 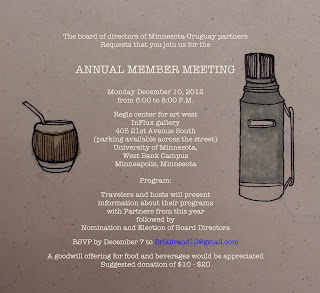 Please save the date of December 10 in your calendar.

The Minnesota-Uruguay Partners annual meeting convenes on Monday, Dec. 10, 2012 from 6:00 to 8:00 p.m. at the Regis Center for Art West, InFlux Gallery, at 405 21st Avenue South on the Univ. of Minnesota's West Bank in Minneapolis.

Parking is available in the ramp across the street.

You will enjoy food from Minnesota with an international flavor and wines from Uruguay (goodwill donations appreciated) and see presentations from members old and new about their travels and activities this year.

Importantly, we will also be nominating and electing new board directors.

Uruguayan photographer Federico Estol, who has visited Minnesota twice with Partners to create and release his book, Hello Montevideo, has won first prize in urban and rural landscape from the Latin American Center for Photography. Congratulations Federico!

Posted by Minnesota-Uruguay Partners of the Americas at 11:03 AM No comments: