The passing of Norman Brown, former Dean and Director of the Minnesota Extension Service

A note received today from Rob Scarlett, vice president of Minnesota-Uruguay Partners, in response to a notice circulated by Partners of the Americas president Steve Vetter about the passing of Norman Brown...

The news of Norm Brown's passing is very sad news; but I very much appreciate receiving this notice and will send condolences to his surviving family members. I attribute to Norm my current involvement in Partners. In 1983, while he was Dean of the Extension Service at the University of Minnesota, Norm hired me to design and manage the tri-lingual Fellowship in International Development that was funded by the Kellogg Foundation. It was an exciting two-year undertaking and a rich learning experience, as well.

Norm's leadership and compassion will be missed in many corners of the world, I am sure.
Best regards to Norm's many friends - up and down the Western Hemisphere!
Rob
Robert H. Scarlett, Vice PresidentBoard of DirectorsMinnesota-Uruguay Partners of the Americas

Posted by Minnesota-Uruguay Partners of the Americas at 2:27 PM No comments:

Rare film footage of Uruguay in the early 1900s 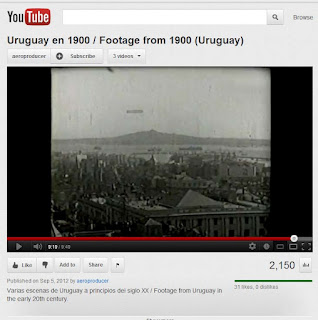 Gary Kuhn, our chapter's leading historian, has passed along these links to rare film footage of Uruguay in the first half of the 20th Century. Amazing stuff. Very much worth a look!

Montevideo in the early 1900s

Posted by Minnesota-Uruguay Partners of the Americas at 6:32 AM No comments: