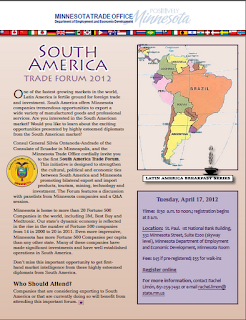 The nation of Uruguay was well represented at a Minnesota trade forum April 17 at the global headquarters of medical device products leader Medtronic in the Twin Cities.

Dr. Nury Bauzan, the country's general consul representing the upper midwest, spoke on trade trends and diversification of Uruguay's economy. She was joined by trade and diplomatic officials from Argentina, Ecuador and Brazil.

Erik Brand, the president of Minnesota-Uruguay Partners, moderated the panel of trade officials. Rob Scarlett, vice president of the chapter, moderated a panel of Minnesota businesses exporting to South America, which featured chapter member and Uruguay native Graciela Cuadrado-Vielguth as an expert commentator.

Medtronic CEO Omar Ishrak offered comments on the region, stressing the importance of South America to the company's future and noting that access to medical services remains a challenge for many countries of the Americas that we must work together to address.

Many thanks to Medtronic for hosting the event. And congratulations to the inspiring Silvia Ontaneda Andrade, Ecuador's general consul in Minnesota, and to the Minnesota Trade Office's Rachel Limon, a longtime Minnesota-Uruguay Partners member and leader, for planning such an ambitious and successful endeavor. An estimated 150 businesspeople attended the half-day conference.
Posted by Minnesota-Uruguay Partners of the Americas at 8:48 PM No comments:

A wave of Legislative Fellows selected from across the Americas have been arriving in Minnesota in recent weeks. Mid-career professionals from Brazil, Colombia, the Dominican Republic and Haiti will be hosted by groups in Minnesota such as the Chicano-Latin Affairs Council, led by Hector Garcia, a Minnesota-Uruguay Partners board director, the National Youth Leadership Council and the highly regarded Latino Community United in Service group (CLUES). Rob Scarlett, vice president of Minnesota-Uruguay Partners, has been establishing these connections and has been rolling out the red carpet for the visitors. Stay tuned for opportunities to meet the fellows in the coming weeks.
Posted by Minnesota-Uruguay Partners of the Americas at 9:19 AM No comments: