The President-elect of Uruguay-Minnesota Partners traveled from Uruguay in September to spend two packed weeks working with chapter counterparts in both Oregon and Minnesota. 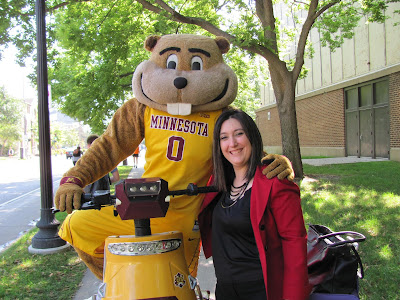 Gilda Battagliese, who had first traveled to Minnesota as a Teacher-in-Residence nearly 10 years ago, is now involved in international projects across North and South America, experiences she shared with Partners volunteers at the "What Works" Conference in Portland, Oregon.

She met there with University of Oregon officials to discuss new teaching methodologies and innovation in the classroom and her experiences with iEARN, the International Education and Resource Network. Linguistics professor Deborah Healey, PhD hosted Gilda for a wonderful dinner discussion. Gilda later met with the American English Institute's Director of eLearning, Leslie Opp Beckham, PhD and Brandy Collier, who showed her a collection of ISTE books consisting of 10 boxes that will be generously donated from the University of Oregon and shipped via diplomatic pouch to Uruguay for distribution nationally through the Alianza, our bi-national center in Montevideo.

Also in Oregon, Gilda presented at the What Works Conference, together with Cathy Healy and Ana Maria González. Their presentation was titled, "Youth Exchanges: Online Journeys Change Lives, Attitudes."

Gilda then traveled to Minnesota, where she was hosted by the much beloved Spanish teacher KC Carter in Stillwater High School, meeting with students and school administrators. She also met with other professionals in the ESL field at the University of Minnesota, where she ran into the Golden Gophers' mascot on the street, Goldy.

Gilda left the urban center of the Twin Cities for several days on the glorious prairies of Western Minnesota, meeting up with longtime counterparts such as Patrick Moore in Montevideo (population 5,000), putting on hundreds of miles visiting educators and officials in towns such as Laq Qui Parle, Appleton and New London. Before returning home, Gilda met with Dana Johnson, a producer at Pioneer Public Television, who is planning a trip to Uruguay to produce a documentary.

Gilda works with the highly regarded bi-national center in Montevideo, the Alianza Cultural Uruguay EEUU. The Alianza has hosted scores of Minnesotan visitors over the years and is recognized internationally for its extensive network across Uruguay and its many accomplishments. The Alianza has been the focal point for our enduring and productive collaboration.


Posted by Minnesota-Uruguay Partners of the Americas at 8:51 AM No comments:

More details on the August 8 asado appear below! 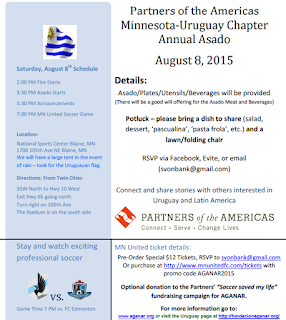 Posted by Minnesota-Uruguay Partners of the Americas at 10:07 AM No comments:

Join us August 8 in the Twin Cities for Asado and Futbol!

Dear Members and Friends of Minnesota-Uruguay Partners,We are delighted to invite you to join what's become a highlight of summer for our group, the annual asado (bbq) before a Minnesota United soccer match.
Members, friends and volunteers from near and far are gathering on Saturday, August 8 (in early celebration of Uruguay's Independence Day) to celebrate the strong and productive ties of friendship that Minnesota and Uruguay share. See a flyer attached.
The fire starts at 3:30 pm, with grilled beef, wines from Uruguay, and non-alcoholic beverages will be provided.  Attendees are encouraged to bring a dish to share.  Please respond on the sign-up genius link below to help us plan for a tasty variety of offerings.  A goodwill offering is appreciated to help us cover the costs of the beef and refreshments.

At 7:00 pm, the Minnesota United will be playing FC Edmonton ($12 tickets available). You can reserve your tickets by emailing svonbank@gmail.com or purchasing tickets on the website with the promo code AGANAR2015 http://www.mnunitedfc.com/tickets

The new mural in Montevideo is in the news in Montevideo, Uruguay... See the article and video in El Observador:

Posted by Minnesota-Uruguay Partners of the Americas at 12:07 PM No comments:

Please join us on Saturday, June 20, for our annual asado (Uruguayan BBQ) in beautiful Montevideo, Minnesota, starting at 1:00 PM.  Please bring along eating utensils and a dish to pass. A free will donation will be taken to defray the cost of the special grass fed beef.

The day's series of events includes a 5 K fun run, Tri-Festa Triathlon, a Fishing contest, a Disc Golf Tournament, all followed up by a Uruguayan Barbeque. Registration for all the events opens at 8:00 a.m. in Lagoon Park. The 5 K race and the Tri-Festa Race begin at 9:00 a.m. followed by the fishing contest at 9:30, the Disc Golf Tournament at 10:00a.m. The awards for the events will take place at 11:30 followed immediately by a Kayak Sweepstakes Drawing (tickets only sold on the day of the event).

There will be plenty of excitement for those watching the event as well as local live music throughout. All spectators are encouraged to bring their own lawn chairs down to the park. Brats, hot dogs and beverages will be available for sale throughout the morning. Click the image below for more details! 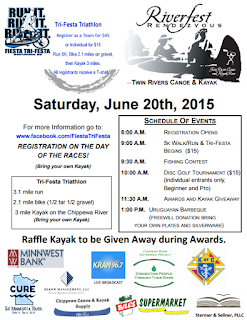 Posted by Minnesota-Uruguay Partners of the Americas at 10:38 AM No comments:

Minneapolis high school student Soren Kremer (16) has been selected to travel to Colombia for three weeks this summer as a Youth Ambassador.

The highly competitive program, funded by the U.S. Department of State and implemented by Partners of the Americas, includes nine other students from Arkansas, Florida, Texas, Kansas and North Carolina. None of the participants has traveled to Colombia before and many have never traveled outside of the United Sates.

The program aims to strengthen mutual understanding, awareness, and cooperation between the people of the United States and Colombia. Youth will gain knowledge and skills in Colombia that will help them contribute to their communities in the United States through service projects upon their return.

Two must-see Uruguayan movies, "Operation Zanahoria" and "The Barbecue," are playing in Minneapolis next month.

Due to the generosity of the Consulate General of Uruguay in Chicago and others, the ticket price has been waived.

Please join us to see these wonderful films. To recap: 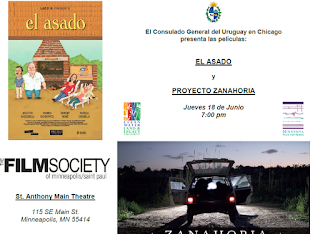 Posted by Minnesota-Uruguay Partners of the Americas at 8:52 PM No comments:

We need to hear your testimonials for Minnesota-Uruguay Partners! (por favor)

Members and Friends of Minnesota-Uruguay Partners of the Americas:

Please help us win a new website by visiting the link below to add your comments in support of MUP and by encouraging others to add their comments.  We are asking for help to get this message out to those who may not be in our membership contact list who may have been touched by our partnership and could help by adding comments by April 1.
Visit the link below by midnight on April 1 to add your testimonial in support of Minnesota Uruguay Partners winning a new website!
http://tc2015.overnightwebsitechallenge.com/nonprofits/813


Help us work smarter!
Recently, Minnesota-Uruguay Partners has been exploring ideas for how to better manage our volunteer database to be able to more effectively keep our members and partners informed of opportunities of unique interest to them.  In working toward this goal, we have identified the need for increased functionality to our website as our first step in the action plan.  To that end, we have entered a unique and dynamic contest called the Nerdery Overnight Website Challenge which invites nonprofit organizations to apply for the chance to work with volunteer webpro teams to create professional quality websites that meet the individual needs of the organization, thus allowing the nonprofits to more effectively fulfill their mission.
You can help!
Contest judging takes into consideration the impact of the organization and to measure this, they ask for members and those touched by the organization to provide testimonials or supportive comments below their favorite organization on the website.  Please help us reach our goal by sharing your story, telling the judges how Minnesota-Uruguay Partners has touched you, or adding a supportive comment about our need for a website update. It only takes a few minutes to add your words of support.  You can also help us by encouraging those you know to make comments as well.
Act fast! April 1 deadline!
Comments need to be added by April 1 in order to count toward the contest judging.
Thanks for your support!
Posted by Minnesota-Uruguay Partners of the Americas at 2:49 PM No comments:

This just in... Vice President Biden to Travel to Uruguay Next Month

THE WHITE HOUSE
Office of the Vice President

Vice President Biden and Dr. Jill Biden to Travel to Uruguay and Guatemala

Additional details about the Vice President and Dr. Biden’s trip will be released at a later date.

Posted by Minnesota-Uruguay Partners of the Americas at 8:53 AM No comments: