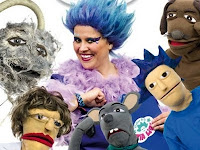 Liliana Enciso, the Uruguayan television personality, playwright and performer, has spent over a week in Minnesota this winter meeting with theater directors at The Childrens Theater, Guthrie, Ten Thousand Things, Heart of the Beast, Illusion, Penumbra and others.

Liliana's tv show, based on the beloved songs of the late musician and poet Maria Elena Walsh, has become a source of education and joy for thousands of children. She appeared on the Emmy-award-winning Kids in Government television program that is produced by Lakeville, MN's city government. Our thanks to Jim Schiffman, the talented puppet master who put this clip together. It is now on the air to thousands of children in Minnesota who are learning about Uruguay.
Posted by Minnesota-Uruguay Partners of the Americas at 10:18 AM No comments: